When two or more people communicate with each other in speech, we can call the system of communication that they employ a code. In most cases that code will be something we may also want to call a language. We should note that two speakers who are bilingual, that is, who have access to two codes, and who for one reason or another shift back and forth between the two languages as they converse, by code-switching, are actually using the third code, one which draws on those two languages. The system, or the grammar, is something that each speaker knows, but two very important questions for linguists are just what that knowledge is knowledge of and how it may best be characterized.

In practice, linguists do not find it at all easy to write grammars because the knowledge that people have of the languages that they speak is extremely hard to describe. It is certainly something different from, and is much more considerable than, the kinds of know- ledge that we see described in most of the grammars we find on library shelves, no matter how good those grammars may be. Anyone who knows a language knows much more about that language than is contained in any grammar book that attempts to describe the language. What is also interesting is that the knowledge is both something that every individual who speaks the language possesses and also some kind of shared knowledge, that is, knowledge possessed by all those who speak the language.

Today, most linguists agree that the knowledge that speakers have of the language or languages they speak is knowledge of something quite abstract. It is knowledge of rules and principles and of the ways of saying and doing things with sounds, words, and sentences, rather than just knowledge of specific sounds, words, and sentences. It is knowing what is in the language and what is not; it is knowing the possibilities the language offers and what is impossible. This knowledge explains how it is we can understand sentences we have not heard before and reject others as being ungrammatical, in the sense of not being possible in the language. Communication among people who speak the same language is possible because they share such knowledge, although how it is shared or even how it is acquired  is not well understood. Certainly, psychological and social factors are important and possibly genetic ones too. Language is however a communal possession, although admitted- ly an abstract one. Individuals have access to it and constantly show that they do so by using it properly.

a. People who speak the same language can communicate because they share the same abstract knowledge of the language.

b. There is now a consensus among linguists that people's knowledge of the language they speak is quite abstract.

c. People can understand sentences they have not heard before because of their abstract knowledge they possess.

d. The word code is often used to mean language.

e. The knowledge that people have of the languages that they speak is similar to the kind of

knowledge that we see described in most grammars found in libraries.

f. The third code that a bilingual person uses is derived from two codes.

g. A code is something that is used to hinder our communication.

h. Everybody who speaks a language has knowledge about that language which is greater than what is described in grammar books.

i. People have knowledge of what can be said and what cannot be said in the language they speak.

j. It is considerably difficult for linguists to write grammars.

l. Recently linguists have discovered how the knowledge of a language is shared and acquired.

The ability to communicate in English is an important goal for English language learners. While there are many influential factors, (イ. for ロ. important ハ. is  ニ. learning ホ. most  ヘ. someone ト. what) a language is interaction with other speakers. One learns to do by doing―people learn to walk by walking and they learn to drive by driving. So (イ. communicate   ロ. follows  ハ. it ニ. learn ホ. people  ヘ. that  ト. to) by communicating. Those learners who use their second language regularly will most likely demonstrate a greater ability to use their second language. It makes sense, then, that learners should (イ. as ロ. be  ハ. given   ニ. many  ホ. opportunities  ヘ. speak ト. to) as possible, both in and out of the classroom.

One of the main factors which

I'd like to walk to a restaurant on , could you tell me where it is?

Hotel clerk: Although this is a small town, the area around the wharf is not safe.

1. a port of history for many brave sailors in the past

2. a traditional port to remind them of historical adventurers

3. a port of tradition where adventurers sailed in the long history

4. a historical port from which many adventurers sailed in the past 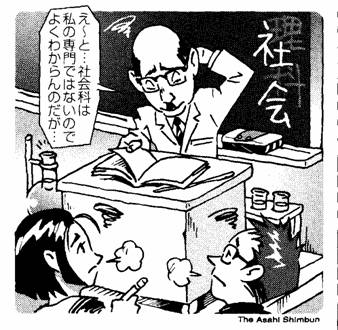 (ウ) the Health and Welfare Ministry

(イ) designed to increase the number of government-financed facilities for the elderly.

(ウ) compiled by the advisory panel to the prime minister with a view to designing a completely new-type of facilities available around-the-clock.

(エ) once worked out but it didn’t bear ay fruit at all.

(ア) The “Plus One Plan” also came to nothing as did the so-called “Angel Plan.”

(イ) Young generation think it an absolutely personal matter whether or not to marry and have babies.

(ウ) The government is even trying to arrange dates for unmarried young people.

(エ) Government-run Health Insurance doesn’t cover fertility treatment for the time being, and the government has no intention to better the status-qo.